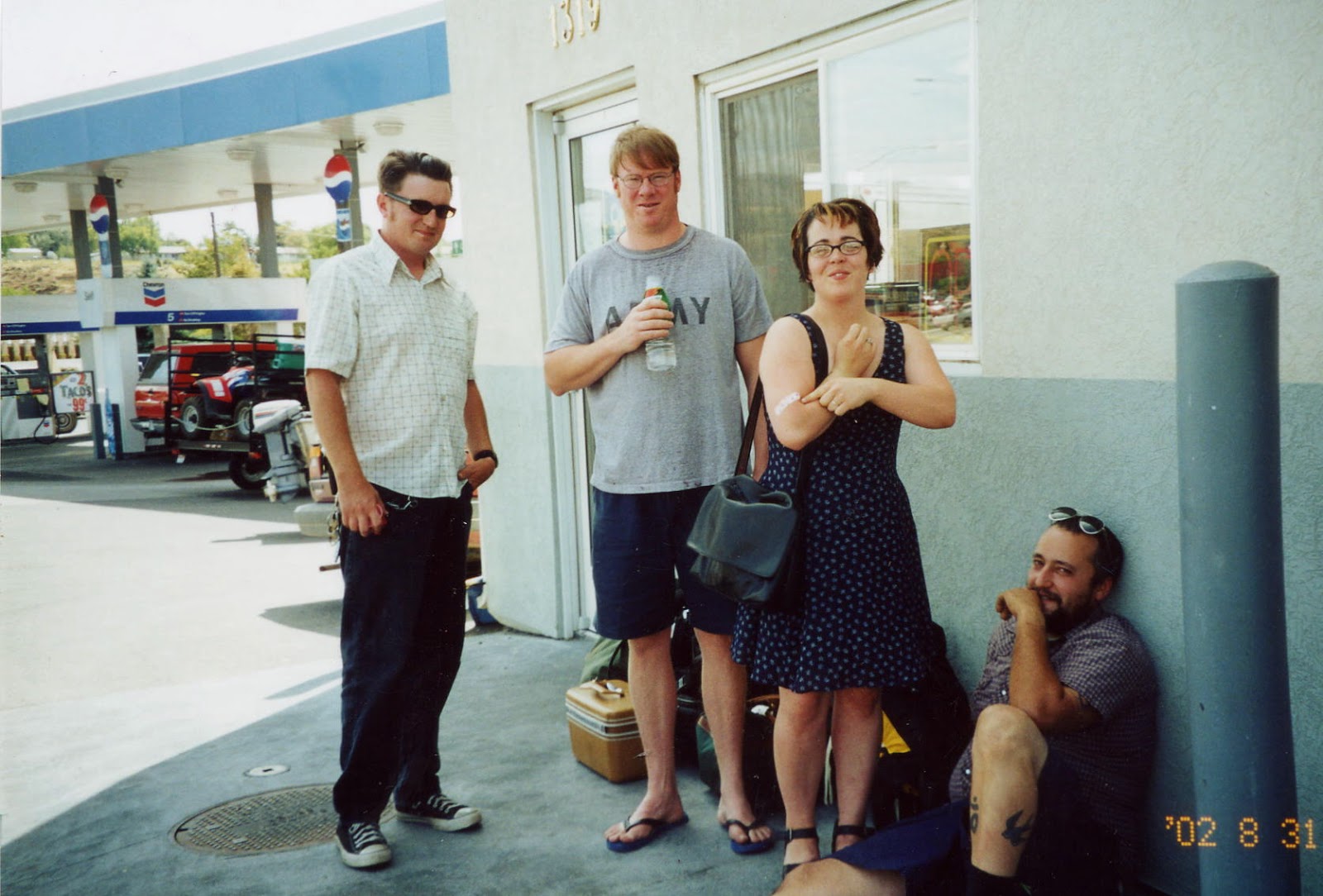 SAT. 8/17    We head east into the rising sun toward Montana skies. Everyone at Jay's Upstairs in Missoula is intoxicated to near death.  Cool metal band from Utah to watch out for is Compound Fraxxure.

SUN. 8/18   We head further east. As far as Buffalo, WY , where we stop at a rest area and drink whiskey and beer and pass out.

MON. 8/19  On to Mt. Rushmore. The bigger spectacle is wild fires throughout the Black Hills.  S. Dakota repeats itself for several hours until we reach the first rest area inside Minnesota where we drink to sleep again.

TUE. 8/20  Minneapolis is found beyond  pastoral tableaus of farmhouse, silo, church steeples, and rolling plains.  This place is clean. So is Lee's Liquor Bar- remarkably so. The walls and floors shine from the labors of the tipplers who reside in the apartments above the bar. They appear from the woodwork at closing time pushing brooms, putting up chairs, wiping walls and tables.  They are paid the next day at drinking time. We are told the only way out of the upstairs apartments is in a county cororner bag.
We would like to thank 'Cookie' for putting us up for the night and buying us a round of White Castle burgers.

WED. 8/21  Cookie is on the phone this morning with a representative of a credit card company. Cookie assures him that there is no minimum payment required of him yet as he scrapes resin from a pipe.  If indeed there were a payment due it would have been mailed in by now.  Cookie can't be sure for there are so many offers that appear in his mailbox daily. Cookie asks the representative where he's calling from.  "Florida?  Wow, why are there so many great guitar players from Florida? You ever listen to Molly Hatchet?...No? ...well, all right thanks for calling-goodbye now."
Today we drive through Wisconsin and attend a White Sox game in Chicago. You must be careful where you turn near Comiskey Park.  Olde Style is a tasty beer.Sox beat Twins 10-2.

THU. 8/22   We try to get some sleep at a rest stop in Indiana early this Thursday morning while being devoured by bugs and feeling like hot licked postage stamps in the humidity that gets worse by the time we get to Cincinatti. This 200 year old city  proudly offers heat, blight, and racial tension. We missed a riot by a few days. We would like to thank the staff of Sudsy Malone's for their generosity. Rich the sound guy even gave us his cut for gas money. Thanks again.

FRI. 8/23   Eastward through the land where coal miners, steel workers, and Amish fight for space at the early morning gas station scene. Pennsylvania is a long passageway to New Jersey where drivers on the Garden State Parkway were courteous and accomodating to our lane changing needs.  They have a friendly local hand signal that seems to say, "Welcome to the Garden State, weary traveler."  This night we played at the Brighton in Long Branch which is just blocks from the mighty Atlantic Ocean. We're told this is the ocean that brought Americans to America.

SAT. 8/24  North into the night we drive to New Hampshire where Dustin's parents live. Live free or die they say up there although I doubt there's much choice about the latter.  Dustin decides to attend a wedding in Maine while we're there. It turns out that his brother Aaron  is the groom. Later that evening we trek back to Cambridge MA where they film that Car Talk show on NPR. We find the Kendall Cafe and have our best show of the tour there.  Big thanks to Norm and Ruth !

SUN. 8/25  Back in the 18th Century a group of Puritans bored of burning witches decided to build a tourist trap in southern Massachusetts and named the hamlet Sturbridge.  "Let's wow future travelers with our simple buildings and creepy graveyard!" they proclaimed. "Let us put the carriage repair shoppe on the far edge of towne where the stranded must parade past our souvenir merchants!"  After crawling along the Mass Pike for an hour our van decides to sputter out and break down here.  We get a room at the Sturbridge Host and get drunk.

TUE. 8/27  Seeing 'Vacation' too many times we avoid even going near East St. Louis and take a crazy back way into St. Louis from the north off 70.  It eventually leads us to downtown, not before I cut some guy off at a wierd traffic circle when I turned right across his lane. Dustin said the reason he never honked was because he was too busy shitting himself.  We find the Way Out club and get another motel room. This neighborhood looks like no good. Later that night our wing window is broken out while the van is parked behind the club. The bad guys stole nothing from us but hit the other band's van and won a free boom box. The Way Out is a way cool club though and we'd like to thank Bob and Sherri for being so  nice.

WED. 8/28  Wichita, KS seems harmless enough from the freeway yet to no one's surprise the club is in the sketchy part of town. It seems fitting also that the van decides to act up again and show us that a rear tire is split and about to blow.  We decide to play the show at Kirby's and then get towed after loading it back up.  Were told leaving it overnight at this neighborhood's service garage would be a bad idea.  Enter Mike and Lucy- a husband and wife team, local hepcats/ guardian angels who put us and the van up at their pad.  Kirby's Beer Store is way cool too and many thanks to Steve there and Softie.

After Wichita our van decided to cancel the rest of our tour by breaking down just long enough to miss the next show. Twice.  We regret not making Ft. Collins, CO or the Neurolux show in Boise. At least our gas costs and repair bills far exceeded any money we made. 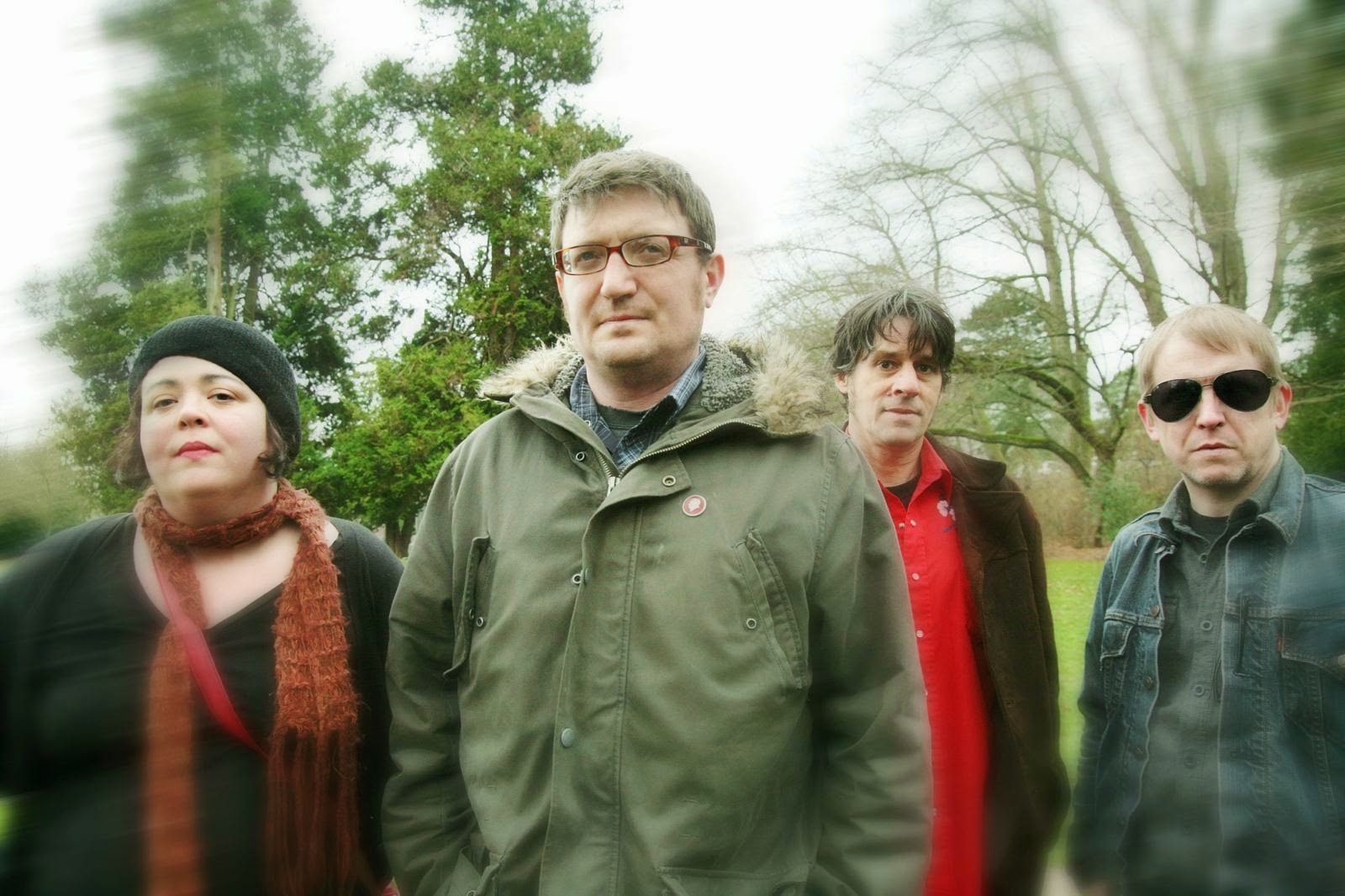 The Riffbrokers were recently in the studio getting ready to record their next album. Heather Millward looked intently at her bass head as Chris Cline, lead guitarist, was busy arranging various effects pedals.

"I'm ready to take my guitar playing to the next level, stylistically. And that level would be to get that sound captured onto some sort of audio file."
"We're still feeling a few things out, trying to find stuff..." interjected Nick Millward, frontman and songwriter, "- like where to plug things in. There are a lot of things going on in this studio, and once we figure out how it works, we'll be off and running."

Ryan Maxwell, the combo's drummer, was tuning his rack toms,
"Chris mentioned the next level- I'd like to get some levels on my drums. I imagine there should be several mic's arranged in some way around my kit, and then I think I say to someone, 'Okay, let's get some levels!'"

Nick: "The new songs reflect a lot of internal and external struggles within the band, as well as our relationships outside the band. Right now we're struggling to find something that says "Record Button".
Heather: "Check, check, check. Check one, two. Sibilance."
Nick: "Heather's a real pro. She just exudes confidence, and it's contagious."

The Riffbrokers' sense of fun in their catchy yet '
too-tedious-to-pigeonhole' sound is also contagious. The new record that eventually gets recorded is sure to be a smash. Available now at Bop Street Records and Sonic Boom online or in Ballard! 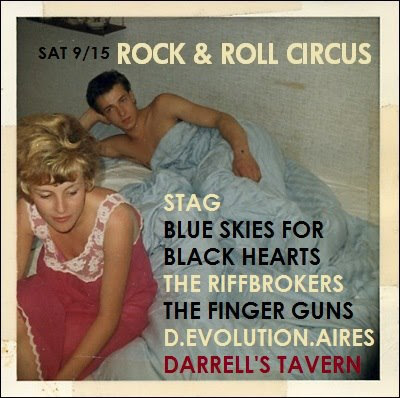 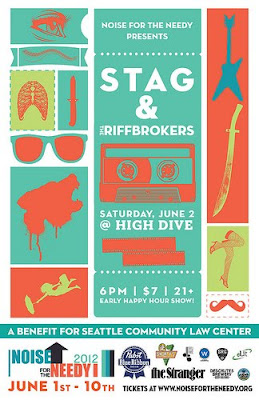 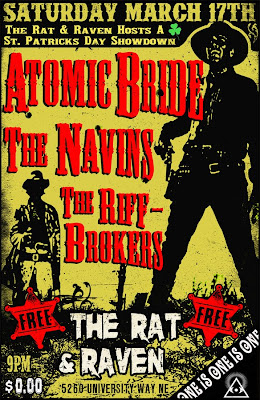