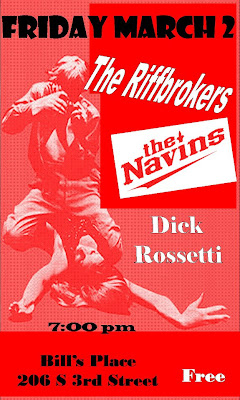 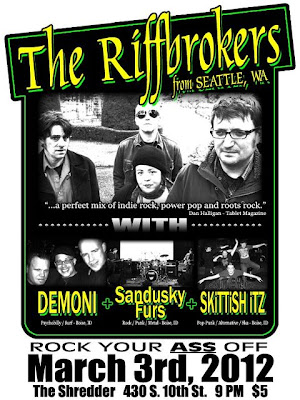 
Tommy Keene - Sunset Tavern, Seattle 1/28/2012. Photo by Steve Stav. All rights reserved.
Seattle maintains an open marriage with roots music, and has been noted for its dalliances with grunge and hip-hop. However, the Jet City has held pop music — jangle-pop, folky pop, avant-garde pop, power-pop — dear to its heart for quite some time. It’s a reliable mistress.

Seatown seemed a fitting stop, then, for eternal guitar wunderkind Tommy Keene on a week-long jaunt up the coast coast. On a Saturday night at the city’s most pop-revering establishment, and sandwiched between two top-notch acts, one of the country’s most under-exposed great talents delivered a speaker-rattlling tutorial on how a pop-rock show should sound and feel like.

The Riffbrokers, Sunset Tavern, Seattle 1/28/2012. Photo by Steve Stav. All rights reserved.
Hailing from the Crenshaw/Costello/Lowe school, lyric craftsman Nick Millward and his band, The Riffbrokers, were a logical pick among the dozen or more bands that could have suitably kicked off the evening’s festivities at the Sunset Tavern.

Acknowledging the presence of greatness, The Americana-accented Riffbrokers brought their “A++” game, interspersing some of their best material among offerings from their new EP, The Green Key Will Let You In. Longtime friend and Seattle music veteran Chris Cline had been recently added on second guitar, and a perfectly seasoned sense of melody and “place” was evident in his playing. A nice addition to a perenially promising, yet underdog outfit whose salad days are still ahead.

The Parson Red Heads - Sunset Tavern, Seattle 1/28/2012. Photo by Steve Stav. All rights reserved.
It takes big stones to follow an icon on a bill; Portland’s Parson Red Heads proved within a matter of minutes that they possess enormous talent, as well. Still touring on the strength of their Mitch Easter-engineered, Chris Stamey-produced 2011 album, Yearling, this quartet defies easy comparisons like a leadoff hitter battling a junkball pitcher. With an emphasis on harmonies and impressive, but never-flashy fretwork, the group echoes turn-of-the-70s folk-pop while remaining entirely genuine — and providing room for rocking beyond the genre.

And it was so effortless, the Red Heads’ set on this night. They’ve had years of practice, but the songs — well-crafted, compelling stuff — nonetheless spilled off the stage as if the band was sitting around a campfire. Frontman Evan Way has the sort of voice that really sticks with you, and the Red Heads exude the sort of warmth that’s impossible to not get sucked into. Altogether a great performance by a band that’s been places, but is headed for loftier elevations.

In between such memorable performances, Tommy Keene lit the place on fire. Arriving in a cab shortly before showtime, battling a nasty flu, the 40-year music veteran played as if he were at a command performance in a concert hall.

A concert hall with some minor technical difficulties, that is. After a few buzzes, squeals and adjustments early on, the sound pumping off the stage got better and impossibly better as Keene’s set progressed.

Tommy Keene - Sunset Tavern, Seattle 1/28/2012. Photo by Steve Stav. All rights reserved.
And progress he did, through a less-than-an-hour blaze of glory that presented staples such as “Turning On Blue,” “Back To Zero” and the calling card, “Places That Are Gone” to a crowd peppered with equal numbers of curiosity seekers, admirers and diehard fans.

“Diehard fans” might be an insufficient term for those in Tommy Keene’s cult of followers. A fellow staked out his place at the lip of the stage well in advance, his Baltimore Orioles cap representing shared roots in Maryland — where Keene was a top draw on the greater D.C. circuit before landing a major label deal in the early 1980s. Between songs, a woman in the crowd proclaimed her adoration, adding that she’d seen Keene open for the Style Council in ’84; it was rumored that a contingent of fans had flown cross-country for the occasion.

Backed by longtime Keene bassist Brad Quinn, along with Rob Brill (who was drumming in Berlin about the time Keene was opening for the Style Council), one of rock’s most under-appreciated storytelling guitarists concentrated on new material from the fabulous Behind The Parade album.

Second guitarist Jon Brill assisted Keene in transforming “Nowhere Drag‘s” tumultuous coda into a full-blown maelstrom (wow, what a song, it should be his new calling card); the twin-guitar attack continued with the aforementioned “Places” and upped the ante during an old Keene standby, a ferocious cover of Lou Reed’s “Kill Your Sons.” As the number — and his set — drew to a close, the singer hopped off the stage and riffed among the fans as far as his amplifier’s tether would allow.

The notion of “it doesn’t get much better than this,” was doubtlessly floating through a number of noggins as the lights went up and the crowd began to sort itself out. Within minutes, as cigarettes were lit in the chilly air out on the sidewalk, the other commonly held thought, “Why isn’t Tommy Keene a major star?” began to be ritually discussed.

It was a very good question.

– Steve Stav
Posted by Leirbag Sven Drawllim at 11:19 AM No comments: